Roll out the RED CARPET 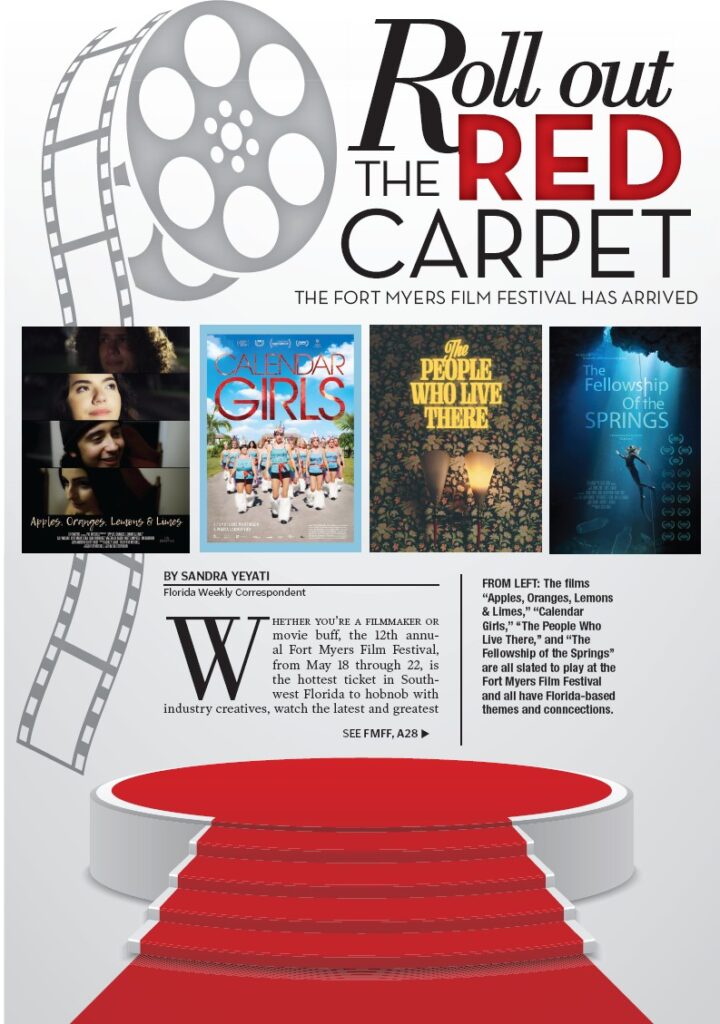 FROM LEFT: The films “Apples, Oranges, Lemons & Limes,” “Calendar Girls,” “The People Who Live There,” and “The Fellowship of the Springs” are all slated to play at the Fort Myers Film Festival and all have Florida-based themes and connections.

WHETHER YOU’RE A FILMMAKER OR movie buff, the 12th annual Fort Myers Film Festival, from May 18 through 22, is the hottest ticket in Southwest Florida to hobnob with industry creatives, watch the latest and greatest independent flicks and delve into deep, philosophical discussions with fellow cinephiles.

The red carpet rolls out at 5:30 p.m. Wednesday, May 18, at the Sidney & Berne Davis Art Center, downtown Fort Myers’ historic, world-class art complex, where most movies will be shown during this must-see, five-day extravaganza. Get your glam on and strike a pose for photographers and videographers.

Honored as the opening night movie this year is “Calendar Girls,” the coming of-golden-age story about a senior dance troupe that calls Southwest Florida home. Through insightful interviews and elaborately choreographed routines, the film captures the inspiring moxie of these bedazzled women that transcend the arbitrary limitations of the calendar.

After the screening, the audience will be treated to a live dance number by the Calendar Girls, as well as a performance by up-and-coming music sensation Johnny Jensen and an afterparty at the SBDAC rooftop sculpture garden and lounge. General admission is $20, while the $100 VIP pass includes a meet-and-greet with the cast and crew. 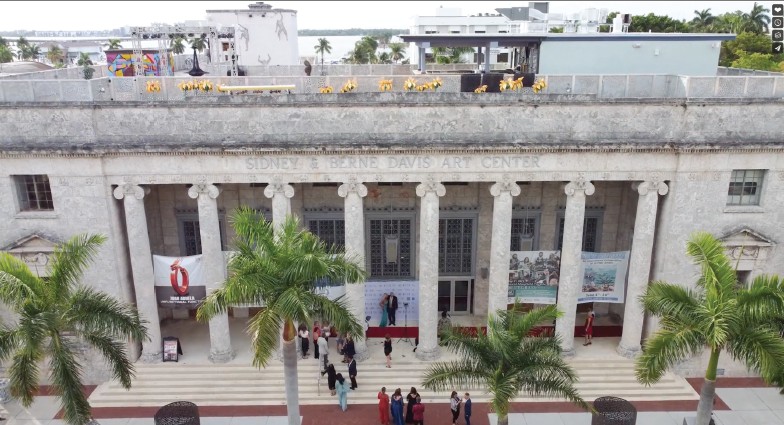 The red carpet gets rolled out May 18 at the Sidney & Berne Davis Art Center. COURTEY PHOTO

“I’m most excited, as I usually am, about the opening night film, and this year’s is extra special because this is the hometown of the Calendar Girls, and this movie shows the power of film to tell a story,” says Eric Raddatz, FMff founder and director. “A lot of people have seen them dancing around town, but not a lot of people know what they’re all about. With this film, we get a chance to dig deep into their lives and see why age is just a number, why they volunteer to do this and how they derive satisfaction from being part of the community. And, they’re all going to be there, along with the filmmakers.”

Thursday through Sunday, 75 movies will be playing day and night at the SBDAC. The lineup features full-length motion pictures, animated films, documentaries and shorts, including works by international, local and student filmmakers. Supplying detailed summaries of all the movies and an easy-to-follow schedule, the downloadable festival guide at www.fortmyersfilmfestival.com is an absolute must to help you choose your favorites and ensure you don’t miss a thing. Showings are $10 each. For an incomparable value, all-day passes are also available for just $20. 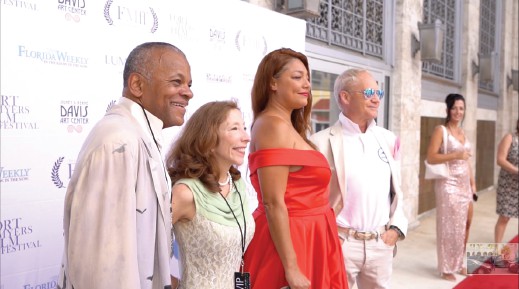 Filmmakers from all over the world will flock to Fort Myers May 18-22. COURTEY PHOTO

The vast collection of subjects encompassed by this year’s movies is emblematic of the breadth and potential of the human imagination. Audiences will find plenty of entertainment, as well as food for thought and conversation, in this enthralling roster that includes tales of triumph over adversity (“It’s Just Parkinson’s”), outrageous and surreal fantasies (“Zodiac”), incisive family dramas (“Relative”), childhood adventures (“Gretel & Hansel: A New Musical”), high-stakes crime dramas (“The Runner”), heartwarming romance (“Apples, Oranges, Lemons & Limes”), coming-of-age stories (“Aurora”), cinematic love letters to natural wonders of the world (“The Fellowship of the Springs”), experimental student offerings (“1-800-777-7777”) and exposés about man’s negative impact on natural ecosystems (“Citsalp”). Mr. Raddatz is particularly excited about this year’s Florida-centric, environmental submissions. “It’s hard to pick favorites or focus on some movies more than others,” he says. “They’re all like little children of mine, but we do have some excellent Florida films and excellent environmental films that are important to understanding our community, and understanding the importance of water quality and understanding our future living here in Southwest Florida.” 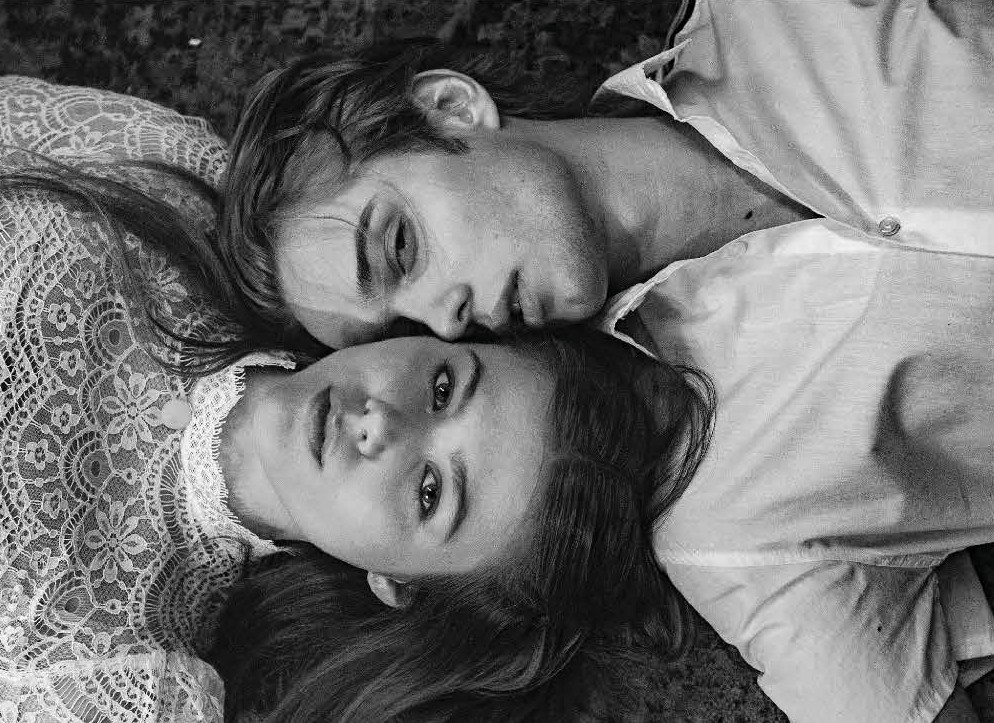 Films like “The Runner” will bring in stars Edouard Philipponnat and Cameron Douglas to town during the fest.

“Apples, Oranges, Lemons & Limes” by local filmmaker-director Pat Mitchell was shot in Fort Myers and Punta Gorda, and has already won awards in festivals all over the world. “Everyone in Between” compares Florida’s natural rivers in the Everglades to Alaska’s Bristol Bay fisheries, offering compelling reasons to maintain the natural flows of our waterways in order to preserve these amazing wild places. “Missing Meadows: Restoring Florida’s Seagrass” shines a light on the depletion of seagrass in the Indian River Lagoon, one of the country’s most biodiverse estuaries and a critical source of food for manatees and other marine creatures. “The People who Live Here” takes a whimsical look at the city of Lakeland. 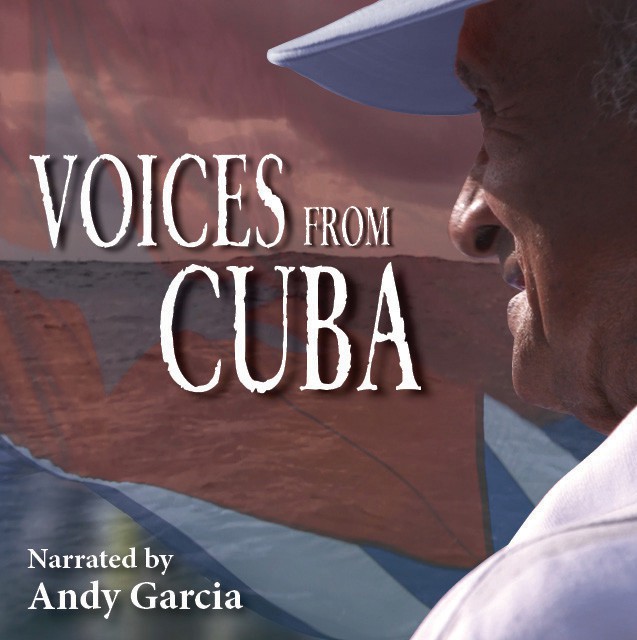 The documentary “Voices of Cuba,” narrated by Andy Garcia, screens Sunday, May 22 at the Fort Myers Film Festival.

The shorts are grouped together into approximate 45-minute sessions called “blocks” with descriptive themes like Global Environment, Though-Provoking, Awesome Fun, International, Weird and Interesting, Rom-Com and Hottest Indie. “The most fun comes from the short blocks because there are usually two or more films you’re going to like,” Mr. Raddatz advises. “When in doubt, I’d say go with a block of short films because they’re keenly curated for independent film lovers, and you will walk away satisfied.”

While the topics and genres are diverse, every single FMff movie champions the independent spirit and fertile creativity of its filmmakers. Many of these movies were made on shoestring budgets with persistence, passion and immense collaborative effort. The stated mission of this festival is to salute their cinematic accomplishments as well as enable and foster future projects.

Mr. Raddatz looks forward to immersing himself in all the delights that this festival offers. “I’ll probably be watching most or all of these films again, and I’m excited to do it. That’s how much I love this selection of films,” he says. “As a film festival, we’re committed to independent films and to our community, and these are entertaining, educational, exciting movies. You’ll meet filmmakers that come from all over the world.”

As the festival winds down on the evening of Sunday, May 22, there will be a repeat showing of whichever movie FMff audiences considered their favorite, followed by a filmmaker panel discussion, an awards ceremony and a rooftop afterparty with DJ music, light bites and cocktails to fuel friendships and industry connections, as well as inspire next year’s new class of films. ¦