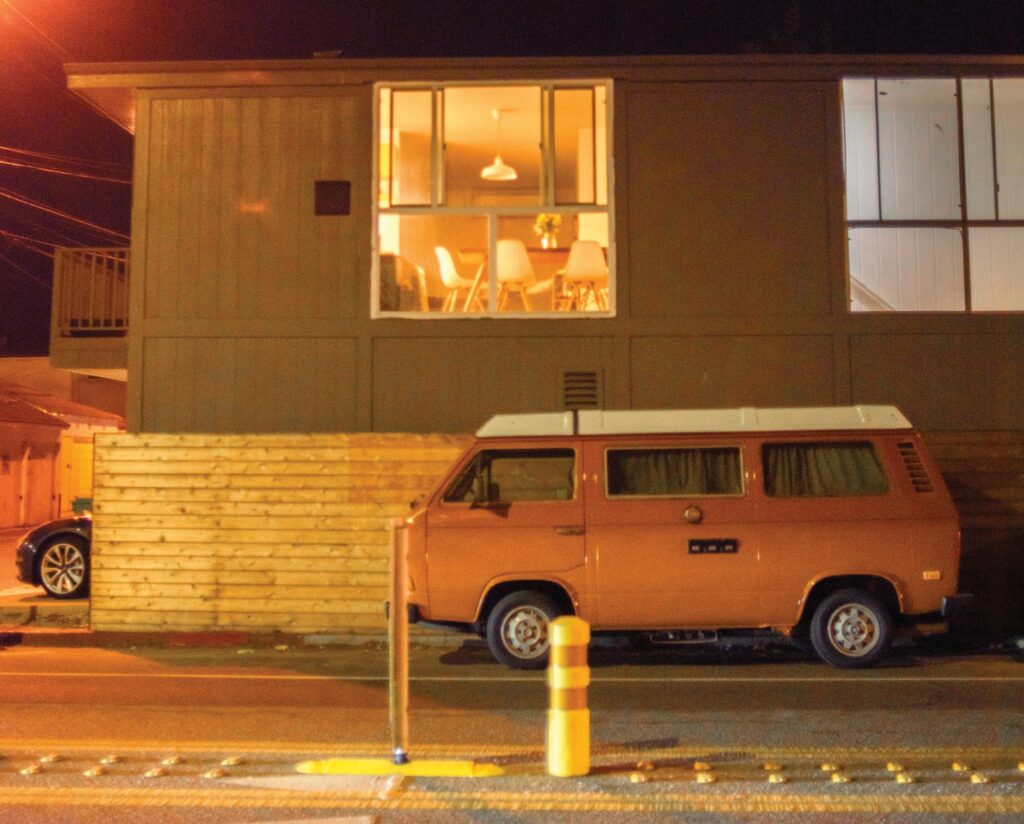 The real story behind the photograph: Evan Williams, a former staff writer for Florida Weekly, now lives in Los Angeles and snapped this picture of the VW van on Venice Beach a few blocks from the ocean. He says: “I had orange on my mind for some reason, and this scene was a gift of orange. If you are constantly looking for photographs, this is the kind of luck the world gives you on occasion. I was also drawn to the voyeuristic quality of peering into the window at night and to the stylish Mid Century Modern furnishings and how they matched the van as well as the symbols on the street. If I were a professional art director, I don’t think I could have put all these elements together any better.

Cindy Reid picks up a copy of Florida Weekly almost every week and had seen the photo prompts for the first six rounds of our 2021 Writing Challenge before one prompt in Round 7 inspired her creative muse.

“I saw that old van and immediately went back to a different era,” the semi-retired writer who lives on Pine Island says. “It made say, ‘Remember when …’”

She spent about two hours on the first draft of “The Road Goes on Forever” and revisited it a few days later. “The deadline was only three days away when I first saw the prompt and felt called to write a story to it,” she says. “I set an alarm to remind myself to send it in. I gave it a couple of rereads and might have changed a word or two, but I didn’t do any real rewriting before I hit send.”

Nor did she ask her partner, Kip Graham, or anyone else to read the story before she submitted it. “I’m my own worst critic,” she says.

Ms. Reid wrote feature articles for Beaufort Lifestyle in Beaufort, S.C., for 10 years and currently writes personality profiles for Effingham Magazine and Pooler Magazine in those communities in Georgia, outside Savannah. 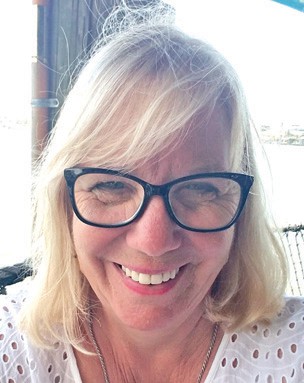 She and Mr. Graham have lived on Pine Island for four years. While living in the Hudson Valley a few miles north of Manhattan for 20 years, she worked in bookstore management and wrote newsletters.

“I love the chance to write fiction that the Florida Weekly Writing Challenge offers,” she says.

We hope Ms. Raney returns for our 2022 Writing Challenge. The 11th annual contest will kick off in our June 1-2 editions and run through September 28-29. Each of nine rounds will offer one photo prompt to inspire our readers’ creative writing muses. ¦

The Road Goes on Forever

When one sees a VW van, the first and right response is to wonder ‘Where are we going?’ or ‘When do we leave?’ VW vans are meant for travelling — not commuting. But when the road narrows and the idea of home beckons, sometimes it’s right to take a break. When that happens, the van sits in the driveway, as if staged for the next trip, but then it gets moved to the side yard, and then inevitably the backyard because, let’s face it, the travelling van days are over.

Robbie knew her grandparents had lived a hippie life. As a baby her mother Sam had crossed the country twice in the van, roaming the blue roads with Gene and Wanda. (They were never called Mom and Dad, preferring the egalitarian Gene and Wanda.) But when Sam was 3 years old the road sputtered to a stop, and so did the VW, or vdub as they called it.

They bought a sagging wood frame duplex in Vermont with the idea to fix it up and rent out one side while living in the other. This suited their principles, which they possessed in abundance, and their pocketbook, which was significantly thinner.

The bank was happy to unload the place, allowing Gene and Wanda to retire from the road and became landlords. Which was their uneasy joke, “Look at us, a couple of capitalists!”

Gene looked the part of a carpenter, with ponytail and flannel shirt, but it was Wanda who had the skills to make the place habitable. Because they felt awkward collecting the rent, and were suckers for a sad story, the rentable side of the duplex became home to a string of artists, poets, single moms, and at least one drug addict.

By now the vdub settled in the backyard on flat tires. When she was 10, Sam discovered the vdub and would sit behind the wheel and pretend she was on an adventure. Her parents’ stories and the few photographs they had (which tended to feature mountain streams and rock concerts) left her intensely nostalgic for what she couldn’t actually recollect. But it had to be more fun than living in rural Vermont, and the day after her high school graduation she got on a bus to California, a copy of “On the Road” in her backpack. She didn’t look back.

California was different from what Sam had imagined. Too expensive, too crowded, too fake. She worked her way up the coast, waitressing at diners and cafes, until she landed in Oregon, which was more real, or at least more manageable, than California. Wanda and Gene wanted to come out and see her, but Sam was embarrassed about her waitress job and the crummy apartment she shared, so she didn’t encourage a visit. The road was beginning to feel like a dead end.

When she discovered she was pregnant, she was thrilled and terrified. Her boyfriend Jess was a sweet but lazy bartender who didn’t think he was cut out for babies or commitments. After Wanda and Gene learned they were going be grandparents, they flew out to check out the situation. Gene took Jess out for a few beers and tried to encourage him into fatherhood. Wanda took Sam to the doctor and stocked her fridge with nutritious food. After a week Sam shooed them back to Vermont, promising to call the minute her labor started.

Robbie made her arrival punctually on her mother’s due date. She was such a sweet and endearing child that she inspired her parents to merge their paths into one road. Money was tight, but they camped on the banks of rivers and chased fireflies in ancient forests.

When she got older, Robbie spent summers in Vermont with her grandparents. Eventually she found her way to the vdub, same as her mother had done years ago. Was the old magic still there? She thought she felt it. Curled up with her notebook and pencil she wrote about Gene, Wanda, Sam, Jess, and all the roads they had travelled, separately and together.

Robbie polished her stories and sent them into the world, which earned her a spot at college with a scholarship to pay for it. She got on the bus the day after high school graduation and didn’t look back. She didn’t need to because everyone she loved was traveling with her. The road does, indeed, go on forever. ¦