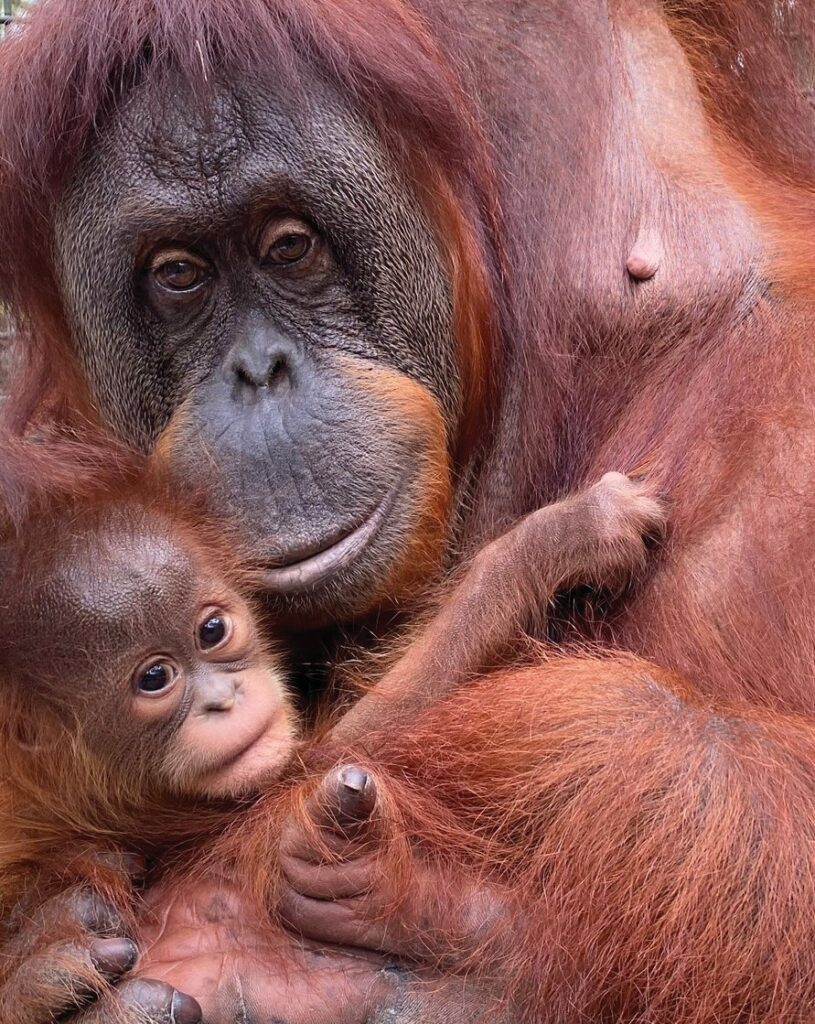 Sunshine and her 2-year-old baby, Cahaya. Sunshine was born in England where her mother was owned by singer Tom Jones’ manager. Sunny and her mother (Daisy) were sent from England to the San Diego Zoo, but both were later sent to a breeder/dealer in Florida. Cahaya’s arrival came as a surprise to everyone at the sanctuary. For 27 years, birth control methods had been successfully implemented for all of the sanctuary residents with no “b/c failures” — until February 2020. COURTESY THE CENTER FOR GREAT APES

About 15 years ago when I worked for WGCU Public Media, I attended a public broadcasting meeting near Wauchula in Central Florida. There I met Patrick Harris from WLRN in Miami. He offered to take a group of us to visit a nearby animal sanctuary called The Center for Great Apes, where he was, and still is, volunteering and a board member. He gave us a personal tour and introduced us to its founder, Patti Ragan.

Patrick explained to us how Patti had created a nonprofit dedicated to serving chimpanzees and orangutans that started from a single rescue of a chimpanzee she was fostering while living in Miami. She subsequently purchased 100 acres in the middle of nowhere in central Florida after her passion to help these apes outgrew her living space. The Center is the only accredited sanctuary for orangutans in the U.S.

The residents of the Center came from lab experiments, former circus animal acts, and private owners who could no longer care for them. The Center now houses approximately 71 resident chimps and orangutans — apes that can live well into their mid 60s, with the majority of them between 25-60 years of age. Each animal has a heartbreaking but interesting story about how they arrived at the sanctuary. 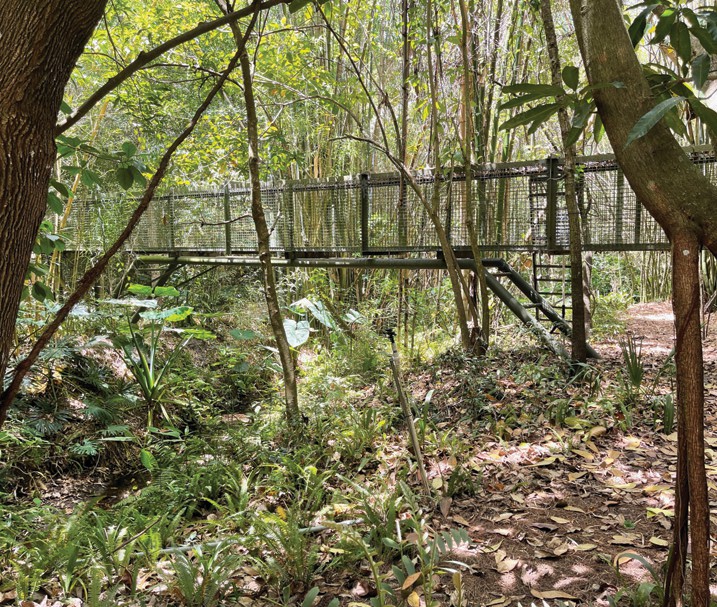 Walkways at the sanctuary allow the chimps and orangutangs to move around the property.

The nonprofit Center is not open to the public, but they do hold two open houses for members and their guests twice a year, as well as special tours for small groups. Since the beginning of Covid, the sanctuary had been closed, but when we received an email that they were having a members’ day for the first time in two years, we quickly got our reserved tickets.

On the Saturday morning of the event, we made the 2-hour drive from Naples to Wauchula past miles of citrus groves and cattle ranches to reach the sanctuary. The large, forested area stood out from the farmland that surrounded it. We parked our car outside the entrance and joined the crowd of people waiting to be checked in.

As we approached the main sanctuary grounds, we walked past a gift shop as well as a silent auction featuring artwork created by its residents. As we approached the main area, overhead in the trees were what seemed like miles of enclosed walkways. These walkways allowed the apes to move freely between their night houses and their large airy enclosures where they spend their days.

Our first encounter was with a female orangutan named Pumpkin. We listened to her caregiver talk about her history and then moved on to visit the other apes. Their most famous resident is Bubbles, a male chimp once owned by Michael Jackson who shares a cage with eight other chimps. After Michael Jackson’s death, his estate has reportedly continued to support the annual care costs for Bubbles at the sanctuary. Although Bubbles’ caregivers consider him to be artistic, gentle, and shy, we were warned to stay far back as he likes to take advantage of an audience by swallowing a large amount of water and spitting at his audience — and (with amazing accuracy), spit he did! One man got too close and got sprayed.

We then moved on to the cage where their newest arrival, a newborn orangutan named Cahaya lived with her mother, Sunshine, and two other orangutangs. She was an unexpected baby, born in February 2020. Now she is one of their poster children (and she is cute).

We walked the grounds and visited the cemetery where their residents spend their final days. We then headed over to a large, brand-new enclosure that was built during the pandemic — this is where seven chimpanzees, recently rescued from a research lab in Alabama, were kept together in their own enclosure. One of the chimps got into a discussion with one who likely had done him wrong, and a loud chorus of screeches and sounds erupted throughout the sanctuary.

We saw several more of the orangutans and again met up with Patti, the founder, while we took a rest break with water and cookies donated for the event. As it was past our lunchtime, we asked Patti where she would go for lunch as there were not many places nearby. She recommended Giovanni’s Restaurant in downtown Wauchula. Their food was excellent and prices were reasonable.

After lunch we drove home through two major rainstorms that washed off the accumulated lovebugs that had stuck to the front of my car. It was another excellent adventure!

— Muffy Clark Gill is an award winning batik and mixed media artist and photographer based in Naples, Florida. Follow her at mcgilltropicalart.com, Instagram:@ muffyclarkgill or on Facebook@ MuffyClarkGillFineArt to learn more about her art and travels.