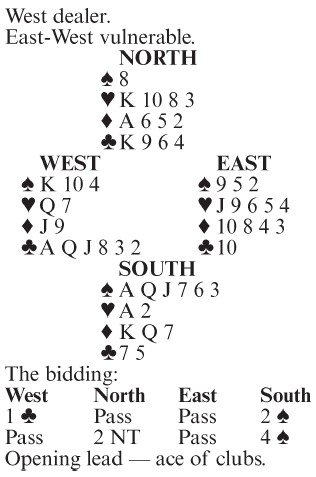 It is said that in war every new weapon gives rise to a counter weapon. In much the same way, many bidding and play conventions can frequently be turned against their users.

Consider this deal where the bidding went as shown. South’s two-spade bid was not based on the normal complement of at least 17 high-card points usually needed for a jump-shift response, but his bid was quite reasonable, considering the enormous trick-taking power of his spades. South knew he was on the verge of a slam the moment his partner opened the bidding, and he wanted the two of them to be on the same page.

East’s subsequent double of six spades was conventional. In the given sequence, it asked West to lead the first suit bid by dummy — namely, hearts.

The significance of the double was not lost on North, who realized that a heart lead through the A-Q could prove fatal. So, he wisely ran to six notrump, a contract that proved unbeatable against any opening lead. He lost a club trick, but that was all.

East was in the unfortunate position where, if he passed six spades, West would probably lead a diamond, while if he doubled, he risked chasing the opponents into six notrump. On the whole, East was right to double, since there was no assurance that either North or South would budge after the double. In the actual case, East was a goner either way. ¦