Three stories of meaningful gifts that will keep on giving 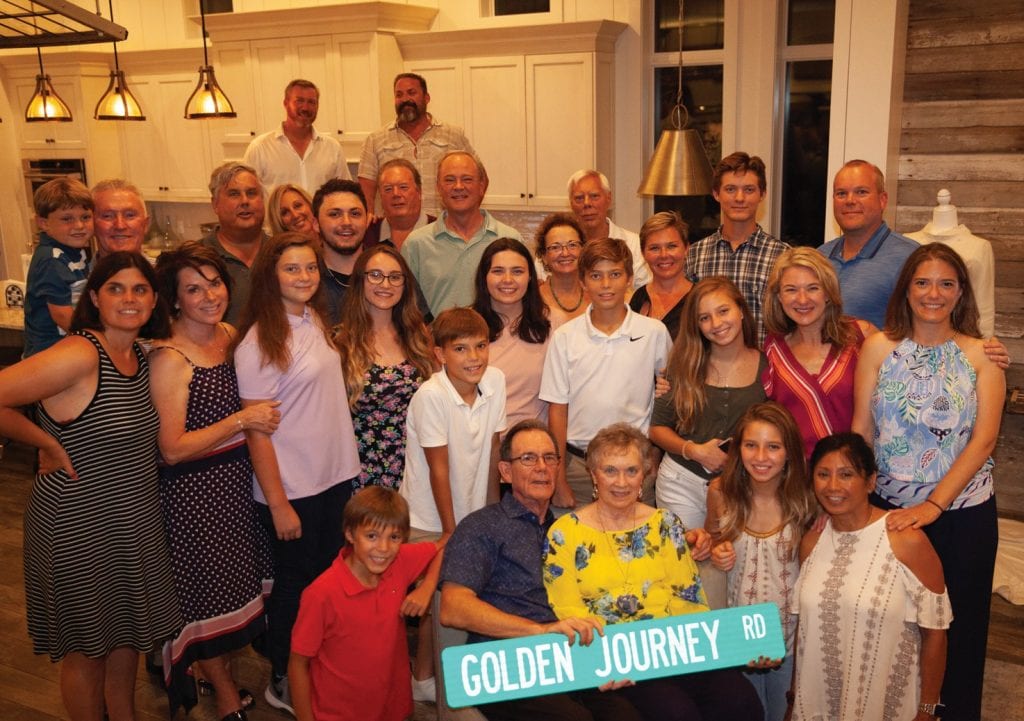 Surrounded by their family, David and Linda Lucas hold the street sign that commemorates their 50th wedding anniversary and that will mark the main street of a new Habitat for Humanity community in Fort Myers’ Harlem Heights community. COURTESY PHOTO

What in the world do you give a loved one who has “everything”?

Brian Lucas found himself in that quandary as his parents’ 50th wedding anniversary approached this summer. David and Linda Lucas had shown Brian a lifetime of giving and selfless generosity, so he wanted their golden anniversary gift to be something that reflected their values. He and his two siblings also wanted to mark the occasion with a lasting tribute to the couple who worked in and supported Southwest Florida for decades.

The elder Mr. Lucas was a visionary developer of Bonita Bay and other neighborhoods encompassing more than 12,000 residences. After his career and raising their family in Southwest Florida, he and Linda became focused on philanthropy. A 2014 local news article noted that, “Lucas’ hobby is giving money away.” Beneficiary organizations include Habitat for Humanity, as well as financial and volunteer contributions to Florida Gulf Coast University, United Way, Bonita Springs Community Foundation, Southwest Florida Community Foundation, Heights Foundation, Canterbury School and Lee County Public Schools.

To reflect that legacy, Brian Lucas and his siblings decided to surprise their parents with a street named in honor of their golden anniversary in a new Habitat for Humanity housing community in Harlem Heights south of Fort Myers. The street, Golden Journey Road, will be the main road that 140 families will use to enter Chico’s Heritage Heights. With groundbreaking anticipated in 2020, the community is the result of a collaboration of individuals like the Lucas’ and corporate supporters, with the lead philanthropic partner being Chico’s FAS.

The Lucas siblings kept the gift a secret until mid-August when they presented David and Linda the street sign for their anniversary.

“They are an amazing couple who mean so much to their family and children. They are the epitome of a generous marriage,” said Becky Lucas, CEO of Habitat for Humanity of Lee and Hendry Counties and Brian’s wife. “It made perfect sense. This neighborhood will support other families. Hundreds of children will grow up around this street.”

The gift was not the first Habitat for Humanity tribute for Brian and Becky Lucas. Before they were married and before she became CEO, the two volunteered together on a Habitat mission trip to Nicaragua. She sponsored a Habitat home in Nicaragua in his honor and upon return, he sponsored two Habitat homes locally in her honor.

Inspiring a loved one beyond your lifetime

Lynne Birdt has been involved in Habitat for more than 20 years as a board member, volunteer and donor. She chose to honor her late husband Marvin with a gift to Habitat’s Women Build program. Deeply affected by the impact she made through her volunteerism with Habitat, Lynne would often tell Marvin about the women and children she encountered through her involvement in Women’s Build, a national Habitat for Humanity initiative to engage women in the effort to provide safe and decent homes for single mothers in need of affordable housing. Before Marvin passed away in April of this year, he and Lynne discussed making donations to Habitat for Humanity and other charities rather than spending money on funeral arrangements.

“Marvin grew up in a single-parent home in the Depression in New York and his mother worked as a seamstress,” Lynne said. “He had people who helped him in his life. It made us feel good and him feel good that he could do this while he was still alive.” Habitat, she added, is “a group with integrity, compassion and caring. They do everything right.”

Honoring a career of accomplishment

After nearly two decades of service to Habitat for Humanity of Lee and Hendry Counties, the last nine of which were as CEO, Katherine “Kitty” Green announced she was moving on to a fresh mission. Having recently celebrated the 1,600th Habitat for Humanity family served with a hand-up to help build their own home and pay an affordable mortgage in Lee County, the organization wrestled with an appropriate send-off.

“Somehow, a plaque didn’t seem like an appropriate token to memorialize the impact Kitty had toward that impressive milestone,” Gary Aubuchon, chairman of the Habitat board of directors, said. “Kitty’s legacy is one of action, of making audacious goals materialize.”

A long-time Habitat donor suggested to the board that they take on the audacious goal to raise $50,000 to sponsor a home in Ms. Green’s honor. Within one week, current and former board members raised the necessary funds and made the presentation during Ms. Green’s final board of directors meeting.

Construction on “The House that Kitty Built” will begin in December, Becky Lucas said.

Studies on human behavior find that gift giving is a surprisingly complex part of human interaction, helping to define relationships and strengthen bonds with family and friends. Gifts can reveal how people think about others, what they value and enjoy, and how they build and maintain relationships.

Research has also identified increased activity in the area of the brain that registers pleasure when people donate to charity. Indeed, psychologists say it is often the giver, rather than the recipient, who reaps the biggest psychological gains from a gift. “Making a donation in honor of someone is a powerful celebration of their significance, especially when the person’s life reflects the interests, values or convictions of the charitable organization receiving the gift,” Becky Lucas said. “Donors who sponsor homes with Habitat for Humanity know who is benefitting from their generosity. You can drive by, see the lights on and know that a family has a safe and decent home.” ¦

— More than 30 years ago, the United Nations General Assembly declared the first Monday in October, this year Oct. 7, to be World Habitat Day to communicate the message that everyone deserves decent and affordable housing. This article was provided by Habitat for Humanity of Lee and Hendry Counties in recognition of World Habitat Day.